Rugby is a sport that can be played by anyone and everyone. No matter if you are big, small, strong or fast. On a rugby team, everyone is needed and you may well be just what the team is missing. In rugby, everybody can contribute something.

Rugby also has something that many other sports do not have: respect for the opponent. Because it is a contact sport, it is important to respect one another even after the match is over. Handshakes are given to the opposition and the teams clap each other off the field. 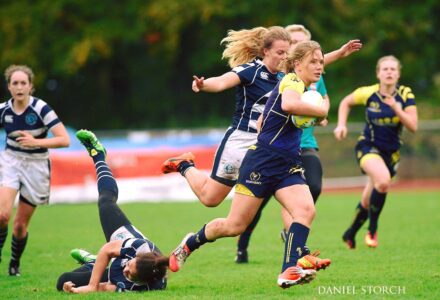 The most important rules

At first glance, rugby may seem a bit confusing and incomprehensible. But there is a point to it all. As it is a sport with many rules, is a very tactical game.

Luckily, to get started, you don’t have to know them all from day one.

The most important rules in rugby are:

Once you have these basic rules, you’re ready to throw yourself into rugby.

A team consists of 7-15 players on the field, depending on the age range and the tournament you are participating in.

A team also has two player groups. The forwards and the backs.

Forwards are usually the biggest and strongest players. The backs, both big and small, are most often the fastest players on the field.

There is room for the big as well as the small. Everyone can contribute with their qualities, which is characteristic of youth rugby. Here the young people learn to use their strength and strengthen their weaknesses.

Senior rugby is the same, but as rugby plays constantly evolve, it becomes harder and harder to see the difference between forward and back players. In seniors, it is more and more about being the complete athlete who is both big and strong but also fast.

DRU – The Danish Rugby Union, has developed the website www.playrugby.dk. Here you can find more information about the rugby game. You can also see what each player does, depending on their position