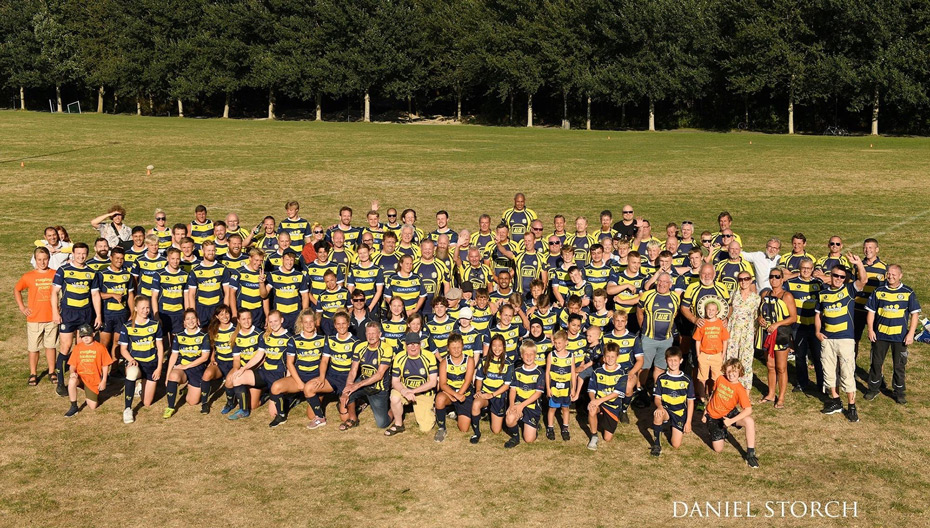 On October 9, 2020, CSR will celebrate it 50th anniversary, but the club’s roots go back even further. This is a historical look at the club’s existence.

Today, the rugby club is called CSR / Nanok, and it is perhaps a good opportunity to summarize where ‘Nanok’ originated. Nanok was founded on April 4th. 1954 by Pastor Niels Søe and Police Officer E.H. Lund as a boys’ club affiliated with Nathanael’s Church, where Søe was a priest and Lund a volunteer sports associate.

The name Nanok is said to have originated from the boys fighting like little bear cubs. Since the only bears in Denmark are found in Greenland, the club’s symbol became a polar bear. “Nanok” happens to be the Greenlandic word for polar bear, and ‘N’ fit nicely with the church’s name.

Nanok’s boys grew older, and interest in the noble sport quickly waned in favour of others. In the early 60s, Nanok went to sleep. However, Nanok woke up from hibernation in the summer of 1965 at the initiative of some boys who lived on the “Tit-Bit” in Holmbladsgade. With Christian Søe (pastor Søe’s son) as the front figure, “the long, hard slog” started to bring life to a senior club in an almost unknown sport that had no media interest.

Nanok’s best position was achieved in the early 70’s with a silver medal in the 1971-1972 tournament. They were as close to the gold as one can get without getting it, finishing one point behind the Comet DM winners. In fact, there were only 2 small, lousy scoring points that separated Nanok and Comet after a “long and hard” tournament – just a small, bizarre penalty. The disappointment was great among the players, and Nanok, a senior club with no youth division, experienced a decline in playing staff in the coming years.

It was enough to just about send Nanok to the eternal hibernation! If Christian Søe, who had started a boys’ club at Christianshavns school (CSR) in October 1970, had not come up with the great idea of ​​merging the two clubs, the Nanok name probably would not have existed today.

The boys club did really well. They were motionless in the Danish youth tournament for quite a few years, and already in 1973 they tried their hand at senior teams. It turned into a B final victory over Comet II in Nanok’s annual 7’s event as well as a training match victory over Nanok 18-14 (28.10.73). In the spring of 1974, they won Nanok’s 20 year anniversary match as well as the 7’s anniversary event. In the Tournament 74 – 75, CSR was to debut at senior level, and it was here that Christian’s plan came to fruition. Because of CSR’s status as a boys’ junior club, they lacked some routine and heavy forwards. As they were almost the only players left in Nanok, what was more natural than putting Christian’s two “heart clubs” together.

It happened in the summer of 1974, and under the name CSR / Nanok (Christianshavns School’s Rugby Club) they started in DRU’s 2nd division in the 1974 – 1975 tournament year.

In 1976, Christianshavn Gymnasium made some rooms available for the club under the roof of Nobel’s old cigar factory in Prinsessegade 62. Here, CSR / Nanok’s first clubhouse was established, and in the following 20 years, formed the framework and foundation for the club’s existence.

The first major success period for CSR / Nanok was the years between 1983 and 1993, when CSR / Nanok was continuously among the four best teams in Denmark. However, from 2007 – 2010, the club was the undisputed best team in the country with 3 championships and 5 trophy titles.

After 20 years, Christianshavns Gymnasium in 1996 chose to put the club on the streets with reference to the school itself using the premises. Good advice was expensive and a clubhouse committee was set up to find an alternative venue. After a few years of intense efforts, we finally manage to find a viable replacement. Through negotiation with the Defense Building Service, a larger lobbyist work and a larger fundraising, CSR / Nanok bought their own Clubhouse with associated changing rooms, barracks, garage and garden in the driveway to Holmen, where CSR in the early 70s ran and performed its sport on the adjoining grassland.

The clubhouse itself underwent a major overhaul and major renovation in the following years, and it was with pride that, on October 14, 2000, CSR / Nanok was able to bid for 40 years of anniversary and inauguration reception. The club has now regained a common base, which can compare with the very best in the country. It also works away at the sporting results. The youth department is again among the best in the country and the seniors are on the rise.

The first 50 years of the club’s history have passed, and CSR / Nanok is still alive and breathing, despite countless crises. The sporting, social and administrative frameworks are gradually being well-founded, so the future draws light for the rugby club CSR / Nanok.